How to Survive a Fantasy Adventure: Teen Edition

Wizards and wannabes star in new novel geared toward gamers

Fans of fantasy roleplaying games (RPGs) can learn what not to do when exploring a new world, thanks to David Michael Williams’ latest novel.

The Lost Tale of Sir Larpsalot features a handful of would-be heroes who find themselves woefully unprepared for the adventure they always hoped for. 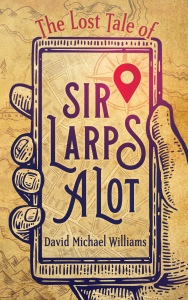 “It’s what’s called a portal fantasy,” Williams said. “Five Midwestern teens are pulled into another world by a sorceress who confuses them for actual champions. They have to complete her perilous quest in order to get back home.”

“In some ways, it’s every gamer’s dream come true and nightmare rolled into one,” he added.

While the coming-of-age tale is classified as YA fiction, the book was written to appeal to fantasy aficionados both young and old as well as anyone who enjoys fun-filled, action-heavy adventures—such as teen gamers who aren’t typically drawn to reading.

Unlike Williams’ earlier sword-and-sorcery novels, which all took place in the magical world of Altaerra, The Lost Tale of Sir Larpsalot straddles the real world, the fictional setting that the LARPers invented for their game and a brand-new realm filled with creatures they have never encountered, not even in their imaginations.

“The teens have to decide which fantasy clichés can help them overcome obstacles and which could get them killed,” Williams said. “Every chapter starts with a snippet of gaming slang, which somehow fits into the next segment of their crazy quest.”

“This book is my tongue-in-cheek love letter to the fantasy RPGs I grew up playing and continue playing to this day,” he said.

One Million Words, Williams’ indie publishing company, published The Lost Tale of Sir Larpsalot on Oct. 1. The paperback and e-book are available at Amazon.com. He plans to narrate and produce the audiobook edition in 2021.

Williams is also the author of four other fantasy novels, including Magic’s Daughter, which was released in paperback, e-book, and audiobook editions earlier this year, as well as The Soul Sleep Cycle, a dreampunk series that explores life, death and eternity. He joined the Allied Authors of Wisconsin in 2005.

This entry was posted on Tuesday, October 6th, 2020 at 10:48 am and posted in News. You can follow any responses to this entry through the RSS 2.0 feed.
« Escape for a spell with new novel Magic’s Daughter