What to do when writing tips contradict

The only constant when it comes to writing advice is inconsistency.

There are times when I wish someone would come up with a template for writing a creative, impactful and commercially successful novel in “Just 10 Easy Steps!” While there are no shortage of textbooks and self-help guides for writers, I fear there’s no one surefire way to become the best writer you can be.

At the end of the day, fiction writing is more art than science.

Since no two minds work precisely the same way, no two writers are going to approach planning, plot structure, character development, research, writing, and editing exactly the same way. A method that works for one author might result in utter failure for another. A customized methodology, then, is key. 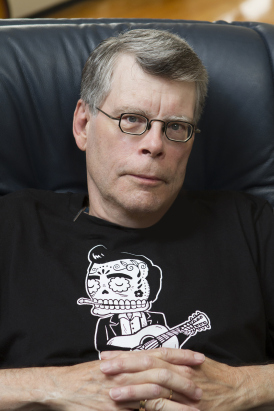 Who am I to question the wisdom of Stephen King? Just another writer trying to figure stuff out. | Photo credit: Shane Leonard

In the first post on my blog, “One Million Words,” I vowed to abstain from stating “absolute rules that govern writing as a craft or business.” Mostly, I didn’t want to come off as arrogant, but there’s a more pragmatic reason for my promise:

There aren’t any absolutes when it comes to writing.

That’s not to say there aren’t valuable tips to share. (I like to think that this blog contains a helpful nugget or two for people careening headlong down the same crazy path I’ve chosen.) And there are plenty of overarching platitudes that seem applicable to most people.

Yet I have to believe that despite how many successful writers have declared, “You must read voraciously in order to become a better writer,” there’s a genius out there somewhere who penned his or her masterpiece in a vacuum.

Anomalies aside, some so-called writing rules outright contradict others. Never was this more apparent to me than during early email correspondences with a new member of the Allied Authors of Wisconsin, who sought my perspective on several conflicting pieces of information—including the sage words of one Stephen King.

The article he referenced included excerpts from King’s memoir, On Writing, which I had read and enjoyed many years ago. In the article, King says writers should “write with the door closed; rewrite with the door open.” The article further paraphrases the point: “You should maintain total privacy between you and your work,” while composing the first draft.

This wasn’t the first time the aforementioned aspiring author had encountered advice dissuading him from sharing his partial manuscript with others. And while I can agree that there are some disadvantages to prematurely exposing one’s story to the critics, I believe the benefits outweigh the drawbacks.

In “Why writers groups still matter,” I outlined how soliciting feedback from fellow writers can help an author and his or her book. Of course, one could wait until he or she is finished with the first draft before joining a writing workshop, sending it to beta readers, and so forth.

So why not acquiesce to King’s (and many others’) point of view? Here’s what I told my friend via email:

I don’t know if I’d say receiving critiques on your work prior to having finished a first draft is detrimental. I can see pros and cons.

Some pros include getting an early understanding about what the readers are latching onto. If their attention is focused on the right stuff, you know you’re on the right track. If they are getting distracted by minor details (or characters), that gives you some ideas not only for how to revise those first few chapters, but also how to treat such things moving forward.

I will say, however, that I think it’s a mistake to perpetually revise chapters. I’ve seen it happen time and time again where writers can’t get past the first handful of chapters because they’re constantly revising until it’s “perfect.” And getting feedback from alpha readers adds more feedback, so, yeah, there’s a higher chance that a writer will want to revise/redo/rewrite instead of move forward.

At Allied Authors meetings, I take notes on the critiques for every chapter I read. But I never work on those chapters immediately after a meeting. In fact, I don’t review them until I’m ready for Draft 2. (Though I will keep comments in mind in case they are relevant for upcoming/unwritten chapters.) I’m a firm believer that it’s better to get a complete draft done before trying to improve on anything. It’s probably because I’ve seen too many people frustrate themselves by trying to make Chapter 1 flawless before moving on. I don’t think I’ve ever seen that work.

Is a completely MS review preferred? Absolutely. …it’s difficult to critique portions of a novel (due to a lack of context, etc.), but imperfect though they may be, I continue to find value in chapter-by-chapter reviews.

So who is right—Stephen King or I?

In actuality, I’m not disagreeing with King on a philosophical level, but the devil is in the details. And even if King and I likely agree that rewriting Chapter 1 ad nauseam is a mistake, there are probably those out there who make it work. Probably, there are folks who never get a second opinion on their manuscript before sending it off to an editor or self-publish it and let the public decide whether it’s worth purchasing.

Writing is a complex activity. What’s ideal for one person might not be remotely achievable by another. (Sorry, Mr. King, but as much as I’d love to knock out a first draft of a novel in three months, real life tends to get in the way.)

Every writer must determine his or her own path from conception to composition. There’s a heck of a lot of alphabet between Point A and Point Z. I suppose the only thing that matters is making it to “The End” without getting lost among all of the warnings along the way.

This entry was posted on Tuesday, April 7th, 2015 at 6:35 pm and posted in The Craft of Writing. You can follow any responses to this entry through the RSS 2.0 feed.
« H. P. Lovecraft’s letters to Robert Bloch: End of era begins another
Haefele will appear on Lovecraft panel at PulpFest »