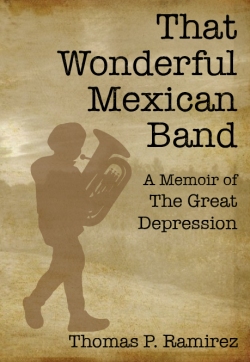 Ramirez began the memoir in the late 1960s when he wrote a short story focusing primarily on his family’s short-lived musical career. He returned to the project in the 1980s, recording episode after fascinating episode and ultimately transforming them into a 388-page paperback.

This excerpt from the back cover sheds additional light on the subject and spirit of the memoir:

Welcome to Fond du Lac, Wisconsin, a small Midwestern town struggling through the Great Depression. The misadventures of a poor minority family with big dreams, as told by oldest son Thomas, reveal a deep love in the face of serious struggles and a rich life in spite of poverty. The Ramirezes’ story is humorous, bittersweet, and—above all—honest.

That Wonderful Mexican Band is sure to strike a chord with anyone who grew up during the Great Depression or ever wondered what it was like to live “way back then.”

In addition to the memoir, Ramirez has written more than 150 paperbacks—spanning such genres as mystery, military, and erotica—though much of his writing has been published under pen names. He joined the Allied Authors of Wisconsin in 1955.

This entry was posted on Monday, January 30th, 2017 at 5:00 pm and posted in News. You can follow any responses to this entry through the RSS 2.0 feed.
« Hawk & Whippoorwill: Derleth’s Overlooked Imprint
Williams interviewed for fantasy webcast »